Come with us around the world as the men who compete in their country’s most popular sports find that,
although it’s not always easy to win in the game of love,
it’s the only victory worth having. 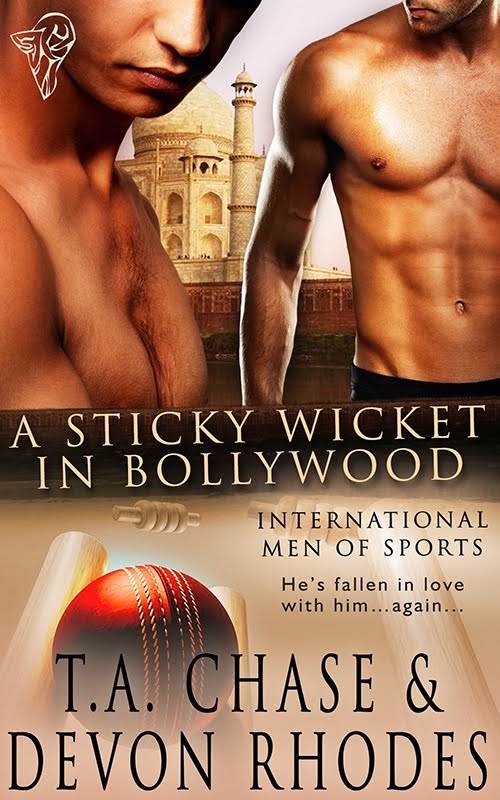 Book One: A Sticky Wicket in Bollywood
(INDIA: Cricket)

A handsome Bollywood actor must choose between his career and a rugged cricket player from his past, who he's fallen in love with…again.


Rajan Malik has the world of Bollywood in the palm of his hand…a beautiful girlfriend, starring roles, adoring fans…He should be happy, but behind the façade lies a man conflicted and exhausted by the pressure placed on him by his ill mother, his agent and society. His life is not his own, and all he wants to do is escape.

Indian Premier League cricketer Ajay Singh can't believe how bad his university roommate Rajan looks when he spots his picture in the paper. They had parted on bad terms. Still, he's moved to offer Rajan his support by renewing their friendship.

But friendship was not all they shared back then. Though Ajay is out, Rajan isn't willing to give up his carefully cultivated Bollywood image to be with him publicly. And with very little privacy, it won't take long for someone to find out they are more than friends.

Their renewed secret affair is fraught with difficulties as they deal with the death of Rajan's mother, the secret of Rajan's till-now absent father, a jealous friend, intrusive social media, and threatening notes from someone who seems to know all about their private lives.

It's a bit of a sticky wicket they find themselves in. Will it be too late when both men finally realise that they'll need to compromise, or stand to lose everything? 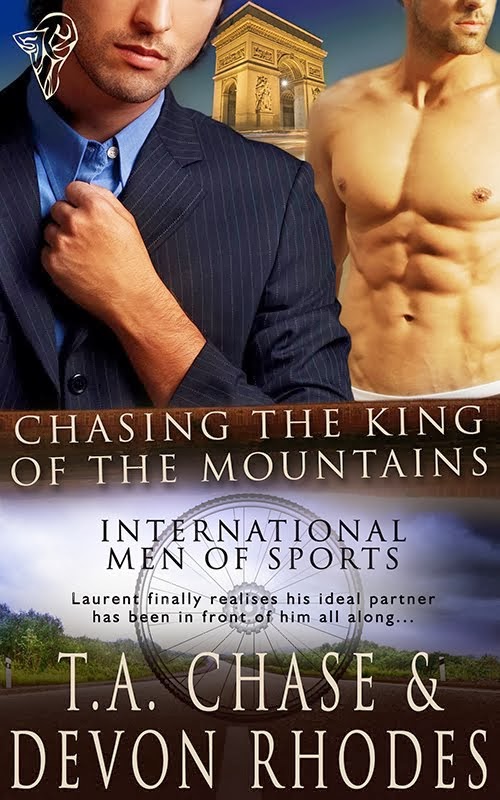 Book Two: Chasing the King of the Mountains
(FRANCE: Cycling)

Pascal might be chasing the title of King of the Mountains, but will he realise in time that Laurent is chasing him?


Pascal Durant, one of the best mountain riders in the cycling world, was about to finally win his first polka-dot jersey denoting him King of the Mountains in the Tour de France. Then he suffered a horrific accident that left him unable to complete the race. In his forties and fighting chronic injuries, he knows he only has one more shot at the top.

Laurent Desrochers, an internationally known reporter, hears about his dear friend’s crash and watches a moving viral video of Pascal, bloodied yet unbowed, congratulating the winner. When Pascal tells him he’s going to do the Tour one last time, Laurent decides to convince his network to let him follow Pascal on his quest.

Friends for a decade, they had never thought of the other as more. Pascal’s focus on his sport and poor taste in men has never produced a long-term relationship. And Laurent’s constant travel causes a rift between him and his fiancé Jan that proves insurmountable.

Laurent finally realises his ideal partner has been in front of him all along. Can he pull Pascal’s focus from his goal long enough for him to know he’s being chased…and let Laurent catch him? 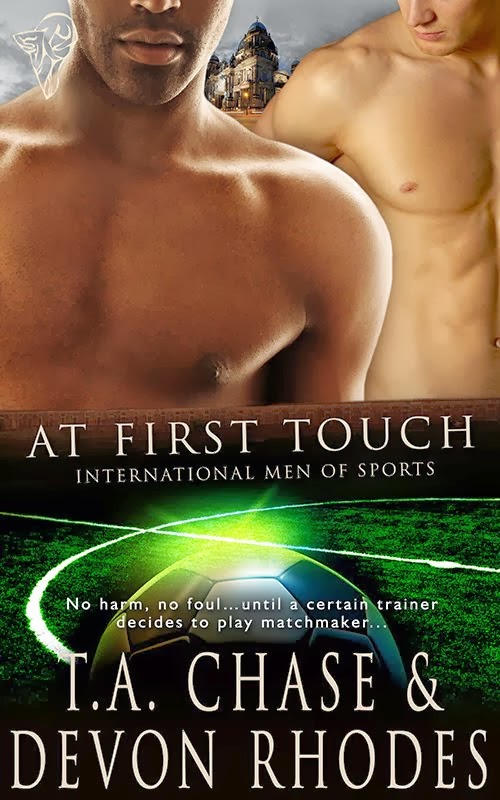 
Excelling at the game he loved was everything to King, until Lukas showed him at first touch how much better his life could be…

Ewansiha 'King' Kroenig is at the pinnacle of his professional football career, even with a problem knee. He keeps his cool and keeps his head down, and that control has served him well. King is bisexual and has been known to date beautiful women, while he also occasionally satisfies his craving for men with the team's trainer. It's a good life, but starting with one bizarre and personal request from his ex, Silvia, his orderly life goes spinning out of control.

Lukas has no problem admitting he's gay, but with a loudly homophobic team captain, he knows better than to go there around the team. He has his whole career ahead of him and is being groomed to take over for their star player, King Kroenig. If he admires King for more than his athletic prowess, what can it hurt?

No harm, no foul…until a certain trainer who knows them both well decides to play matchmaker, then all bets are off. And once they've experienced that first taste, they want more. But it's not as simple as hooking up or dating when you're teammates, with high profiles and little privacy. And when they each suddenly gain responsibilities they never expected, they must figure out a way to reconcile their personal lives with the expectations of others. 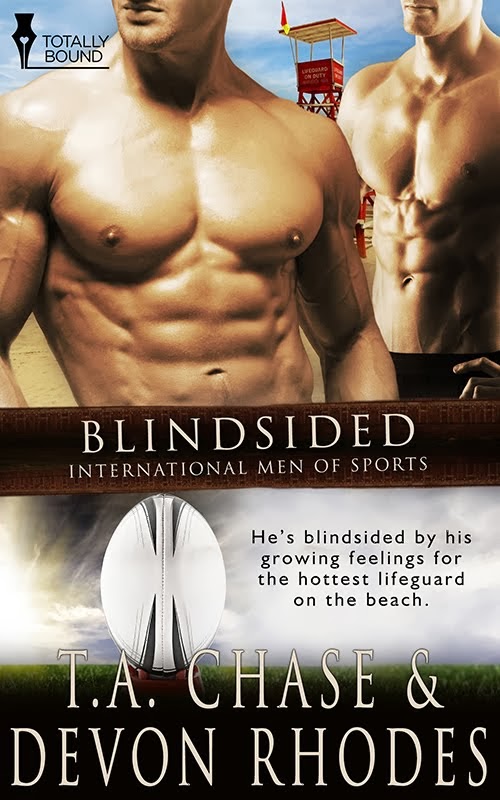 When Liam is transferred to Melbourne, he’s blindsided by his growing feelings for the hottest lifeguard on the beach. Luckily Matty knows mouth-to-mouth…

How did alone turn into lonely? Rugby player Liam Holmes is forced to ponder that when he’s transferred from Canberra to Melbourne, away from his cousin and all that’s familiar. It’s part of playing pro, adjusting to a new team and teammates, but Liam finds himself searching for something more than his career.

Matty loves the beach and being a lifeguard is all he’s ever wanted to do. He notices the new hottie at the beach right away and wonders what his story is. When he encounters him at the pub, he takes the reserved league player under his wing and into his group of mates, and they soon become fast friends.

Friends isn’t all they want to stay, however. And once they give in to their attraction, the two are blindsided by the emotions that come with their deepening relationship. Can two men without any experience at relationships both navigate their way to steady ground? 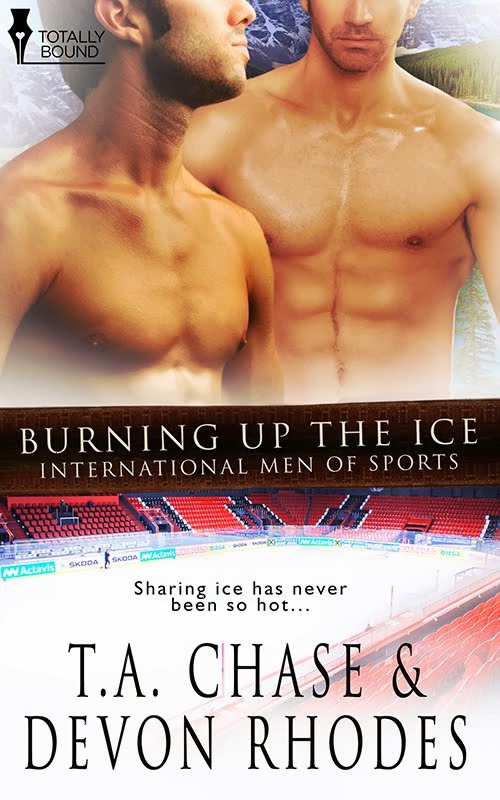 Book Five: Burning Up the Ice
(CANADA: Hockey and Curling)


Two men, two very different sports and one rink—sharing ice has never been so hot.

Olivier ‘Big Bang’ St Pierre is back in his hometown while he recovers from being in the wrong place at the wrong time. Hockey’s a contact sport—still, he didn’t count on the locker room being dangerous. As a professional hockey player, he also didn’t count on it being hard to find ice time. But when a rink shuts down unexpectedly in a winter-sport-crazy town, even being a big name won’t help as people scramble for whatever they can get.

The first time Ethan Campbell hears from the local hockey legend he knew as a kid, Olivier manages to insult both his family’s rink and his new sport—curling. So he’s not exactly receptive when Olivier shows up in person to plead his case. He makes a sarcastic offer…and is shocked when Olivier takes him up on it. Ethan’s bad experience with hockey had left him cold. But soon he and Olivier are burning up the ice.

Ethan is tied to his town, job and family, while Olivier will be going back to Chicago to rejoin his team as soon as he’s able. It can’t possibly last…can it? 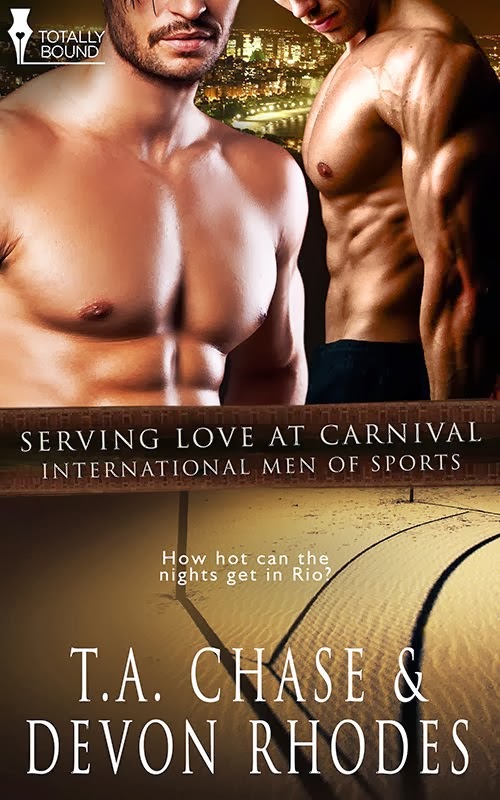 Anything goes during Carnival, and two men are about to discover just how hot the nights can get in Rio.


Along-time member of a samba school, Pablo knows that Carnival in his hometown of Rio de Janeiro is always hot, and the tall, sexy man he hooks up with during the festivities is even hotter. He usually doesn’t go back for repeats, but something about Diego has him working harder than he ever has to try to meet up again.

Diego travels all over the world on the pro beach volleyball tour, but has found that the sexiest man he’s ever met lives right there in Rio. After a few false starts, they finally seem to hit a groove, but as time goes on, ghosts from Pablo’s past begin to affect their present.

It’s tough being the partner of a professional athlete, competing with travel, fans,and training for their limited time. Pablo’s always been let down by people who found it easy to leave him behind. Is he prepared to accept what Diego can offer? 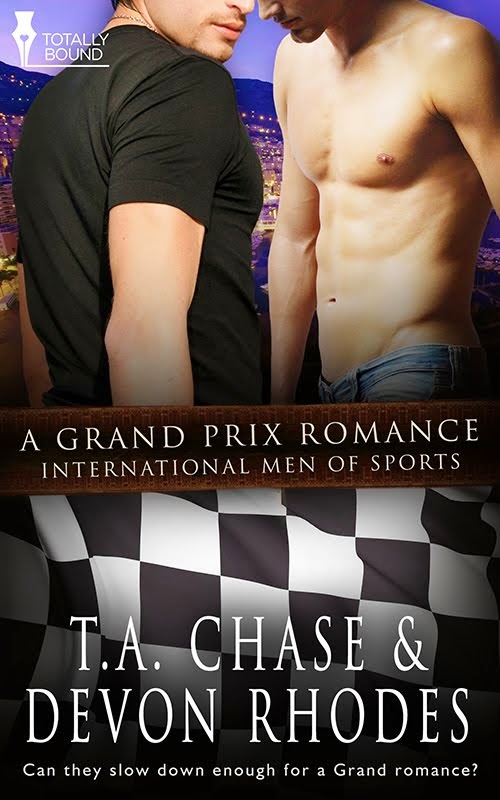 Two men who share a passion for speed find out what can happen if they slow down enough for a Grand romance.

Paolo’s more than just a football player—he plays at life. But underneath the party boy image, he’s well aware that his career is stagnating and a big move might be needed. Before anything like that can be decided, though, he’s going to enjoy his annual trip to Monte Carlo for the Grand Prix.

The only thing Johann loves more than his Formula One racing is gambling in the glittering atmosphere of Monaco. This year, he finds that high stakes applies to more than just cards—his heart is going all in and if he bets it all and loses, it could cost him everything.

Reader Advisory: This books contains characters from At First Touch but can be enjoyed as a standalone. 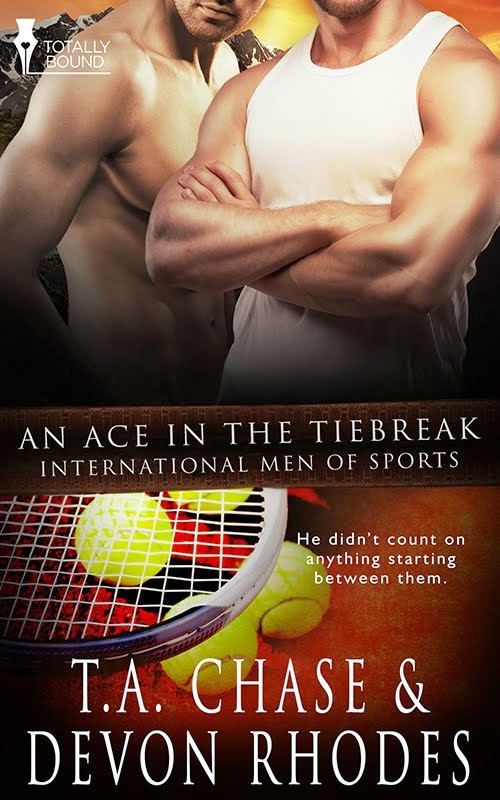 Book Eight: An Ace in the Tiebreak
(SWITZERLAND: Tennis)

When Robin has to save his career and choose between two very different men, he has to try not to double-fault…while hoping for an ace.

Professional tennis player Robin Keller has a love/hate relationship with most everything in his life—his game, his tennis rival and sometimes hook-up Danie Coetzee, the pills and alcohol he uses to get through his days. Nothing seems to be going right anymore, and when he hits rock bottom after the French Open, drastic changes are the only option.

Quinn Damaris has a well-earned reputation for turning around the careers of the athletes he acts as chef for, and he can tell from the first meeting that Robin is going to be a challenge. As a double amputee, he’s not a man to back down just because the road is rough.

He didn’t count on anything starting between them, especially when the way he realises Robin is gay is when he sees him with Danie. Robin will have to make a choice. Is Quinn kidding himself to think that a tennis star could fall for a man who isn’t whole? 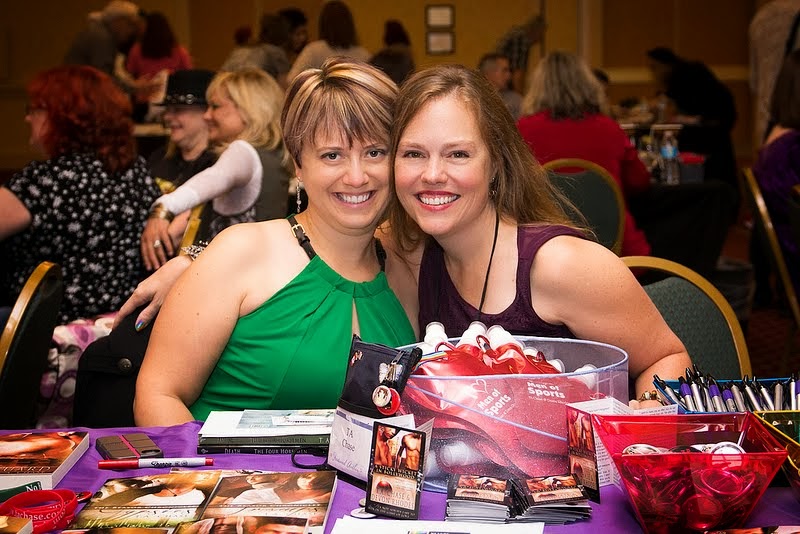